The Genius of Oscar Wao

There are many layers to The Brief Wondrous Life of Oscar Wao..

For myself, it is an ode to the lifelong difficulties faced by immigrants, trying to fit into a place they do not belong.

The main character – Oscar, who’s real name in the book is Oscar de Leon, particularly suffers with his inability to make friends at school. Anyone who has undergone bullying in their school years can relate to his experiences while sympathising with him being shunned by his relatives for not acting like a ‘real Dominican man’.

Adding to the emotional grip of the book it is told from the point of view of Oscars mother, Beli, and of how she barely survives the brutal dictatorship of Rafael Trujillo, a real life figure, who ruled the Dominican Republic while she was growing up.

These two experiences mirror each other in the pain both suffer while trying to achieve their dreams. While Beli deals with her unhappiness by taking it out on her children, Oscar buries himself in his comic books and fictional lands, trying to find a solution to ‘the Fuku’, a supposed curse that has haunted their family through the generations.

Oscar Wao stands out because of Junot Diaz’s unique writing style. It has a youthful, yet knowledgeable tone, with the narrator, Yunior, who is a family friend of the de Leon’s, making references to Ancient Greek mythology alongside science fiction and fantasy series.

At one point he compares Oscar’s difficulties fitting in with kids his age to being an ‘X-man’ or ‘having a pair of tentacles growing out of your chest’. This casual tone makes the book an easy read while also surprising the reader with its insight into the human condition. When he is at a particularly low point Oscars great aunt reminds him ‘there is someone who will always love you’, which I consider to be a touching moment in an otherwise fast-moving novel. 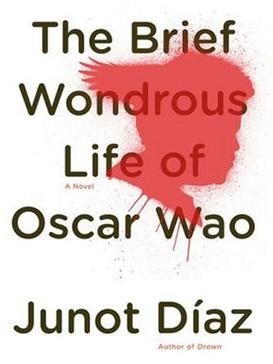 Yunior contributes some tender moments of his own, such as when he is regretting his awful treatment of Lola, Oscar’s older sister. He dreams of the time ‘before all hope died’ and not being able to ‘finally say the words’ to save his relationship with Lola, even as he continually cheats on her with other women. While his character is often seen as misogynistic, certain scenes show him as having more dimensions than typical womanisers in fiction. Diaz skilfully creates different moods in the narrative with his distinctive voice, leaving a lasting impression on the reader.

Another much-lauded point is Diaz’s inclusion of untranslated Spanish.

In every viewpoint of the story, characters break out into Spanish with absolutely no attempt by Diaz to make it understandable for the reader. As critic Bharat Mukherjee says, the use of Spanish shows Diaz’s ‘unwillingness’ to ‘erase’ his ‘linguistic and historical inheritance’. For many second-generation immigrants, this decision can be seen as Diaz embracing his heritage rather than ignoring it. It also gives the work a feeling of escapism for the reader, and is probably unlike anything that most people will have read before. For all the terrible events that occur in the Dominican Republic, Diaz is still willing to celebrate the country of his and the character’s origin.

The novel details the complexities of human relationships, while also subtly weaving in the history of the real-life dictatorship of the Dominican Republic and its lasting effects on its citizens.

For insights into another writer who delved into great social issues please see: In your search for acceptance, you may find a greater truth – Carson McCullers’ ‘The Member of the Wedding’

This website uses cookies to improve your experience while you navigate through the website. Out of these cookies, the cookies that are categorized as necessary are stored on your browser as they are essential for the working of basic functionalities of the website. We also use third-party cookies that help us analyze and understand how you use this website. These cookies will be stored in your browser only with your consent. You also have the option to opt-out of these cookies. But opting out of some of these cookies may have an effect on your browsing experience.
Necessary Always Enabled
Necessary cookies are absolutely essential for the website to function properly. This category only includes cookies that ensures basic functionalities and security features of the website. These cookies do not store any personal information.
Non-necessary
Any cookies that may not be particularly necessary for the website to function and is used specifically to collect user personal data via analytics, ads, other embedded contents are termed as non-necessary cookies. It is mandatory to procure user consent prior to running these cookies on your website.
SAVE & ACCEPT
Go to Top